Who Knew Chickens Had So Much Personality?

Who Knew Chickens Had So Much Personality?

Before I got my first chicken I assumed that the chicken yard would be a place I would run in and out of without much thought or concern for the emotions of my birds. I was under the assumption that they would want little to do with me other than during feeding times and the extent of our relationship would be, “I feed you, you give me eggs.” But then something happened…they developed an odd habit! 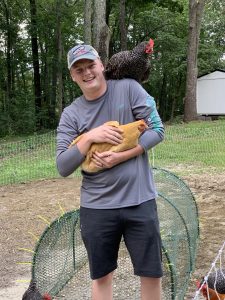 It is the craziest thing to see. When anyone walks out the back door of our house they come running over to be picked up. They will get at your feet, do this weird little squat thing and look up at you as if to say, “Come on! I am waiting.” And if you don’t pick them up they will just fly up and sit on your shoulder.

I can barely get them fed, eggs collected or the cooped straightened up without one of them wanting to be picked up and toted around with me. And, if you are ready to put them down and they are not ready to be let go, they will lean into you and hold on to your arm and not let go. Not just one or two of the birds…nearly ALL of the birds do this!

And it isn’t that they are running to the person who feeds them or brings them treats. That would make sense. If they only ran to me and ran from others, I would believe that they were attached to food, not humans. However, when my husband is out changing their water, it is not uncommon for him to have two or three birds on his shoulders. My son, who is rarely out in the chicken yard was here last weekend and he picked up one bird and within seconds, had another on his shoulder.

I know cuddling isn’t standard chicken behavior because I have asked several people. So, why are my chickens so needy for attention? What are your chickens doing that seems to be odd bird behavior? Mine can’t be the only ones!

What Are The Costs Of Raising Your Own Meat?

Where Should I Buy My Chickens?

No Result
View All Result

Are you sure want to cancel subscription?